A couple of months back, I wrote this post in response to Mayim Bialik’s video where she tackles “open relationships” and does it quite badly.  Many sex educators who understand ethical non-monogamy and polyamory and all spoke out against her video because of how many ways Mayim got it wrong.

Two days ago, Mayim posted a new video in which she admits that she was wrong.  After watching it, I appreciated that she took in new data and realized how many ways she got it wrong.  Did she change her personal opinion about her ability to “do” ethical non-monogamy? No.  But she did admit that with the new data she received that her eyes were open about how wrong she got it.

I admired the fact she came forth and said exactly that.  Especially since in her first video, she relied heavily on research and science to back up her knowledge of open relationships.  For her to look at data and science she had not considered before and realize she had spoken without all the data is exactly how it should work.  I mean, she’s still monogamous, but the reason people were upset wasn’t that she was monogamous, it was because she got the “facts” wrong and drew incorrect conclusions about ethical non-monogamy based on those facts.

Periodically, I make the mistake of reading the comments.  And today was one of those days, I guess.  Comments like this:

Nowadays whatever you say it’s going to offend someone at some point….

People, like me, were not upset because she took something I do to task with her opinion about it.  I was upset because she used her position as a neuroscientist to try to prove why it was “unnatural”.  In other words, she was using facts to support her own opinion which is fine but her facts were wrong.  That was the problem people had with it.  HER FACTS WERE WRONG.

Just because a lot of people do it doesn’t mean it’s ok, or healthy. A lot of people smoke crack or meth too, but it’s still a stupid thing to do. It’s so incredibly sad that in today’s society we are expected to just accept whatever choices people make without being able to voice our own opinion on it, or, God forbid, criticize it.

No one says she cannot have her opinion about non-monogamy.  But to say you are “going against biology” when you do it.  Or that sex is only for procreation as neuroscientists know IS problematic especially when spoken from a position of authority on such subjects.  This isn’t incredibly sad that we’re just expected to accept people’s choices.  You can have your opinion and still be wrong based on the facts.   It is your choice to change your opinion based on the facts or you can choose to keep your opinion and believe the facts are bullshit.  Doesn’t make your opinion any more right because it’s “your opinion”.   I do love how this person associates smoking crack to ethical non-monogamy as both “stupid things people do”.  Logic fallacy anyone?

And I think that is the biggest frustration I have in this day and age.  Don’t like the reality that the facts or data don’t support your opinion? Call your “facts” alternative-facts instead of realizing, “oh shit, I might be wrong and need to re-examine some things for myself.”   Caught in a debate you are losing, just say, “well that’s my opinion” because no one can tell you that your opinion is wrong.   EVEN THOUGH IT IS.

One of the biggest debates we have in the house especially with my 15-year-old is this concept.  She likes to be a know-it-all, yet usually proves quickly how her knowledge is barely a passing knowledge of the subject.  When caught in this realization that someone knows more than she odes which may mean her understanding is wrong, she immediately goes to “it’s my opinion – you can’t say it is wrong.”

Ah, my special snowflake, you ARE wrong.

The fact that Mayim came out and made a video saying “I got this totally wrong – and here is why” is exactly how grown-ups talk and deal with things.  Or should.  She recognizes that her opinion of “non-monogamy cannot work for me” while her facts to support why they cannot work for anyone were wrong.  No one is trying to get her to believe ethical non-monogamy is something she should embrace herself; just that because she can’t “do it” doesn’t mean the science proves no one can do it.  And in the end, she recognizes that she was trying to use facts to support her opinion on a subject while ignoring other facts that may run contrary to her overall feeling that non-monogmay cannot work for anyone.  The opinion she changed was that it could not work for anyone while not changing her personal feeling that it could not work for her.

Everyone wants to say what is wrong with our society today.  And I think that is the big thing – no one can tell opinion from fact.  I am reminded of this article: No, It’s Not Your Opinion. You’re Just Wrong.

I really need to not read comment threads.
But hey, at least they give me something to write about. 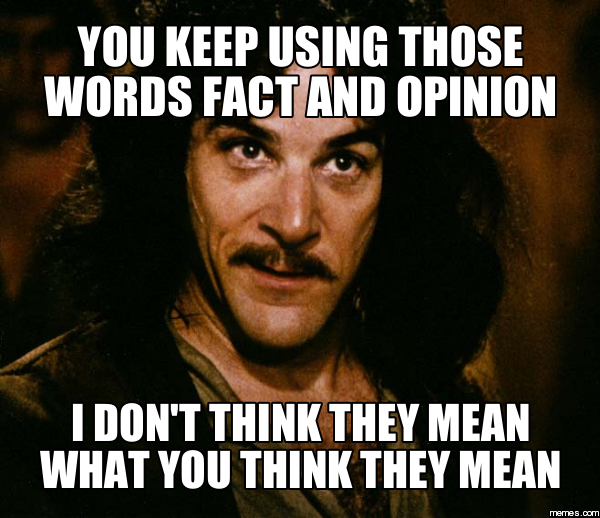