I have two partially written posts that aren’t going to get finished this morning. Should have finished them when I started writing them. Hate it when I lose the flow.

My cube neighbor on Friday afternoon learned this very valuable lesson.  Sarcasm is my thing. He overheard a conversation I was having with someone where I said “I took away her security to do that because she thinks she knows what she doesn’t know – and doing it will keep me from having to stab her with her pencil.”  No, I’m not stabbing anyone with their pencil.  At least not today. But, I shocked him.

Too bad he didn’t hear the person I was talking with who was laughing hysterically.

I told you yesterday about the Saturday drama with DJ.  Yesterday as she and I were walking someplace, she put her arms around me and said “I feel like an idiot.”  I asked her why – and she told me how stupid she feels for acting like she did on Saturday over something so idiotic.  “Do you understand why were were so insistent that you do it?” was my question.  She did and thanked me for it.  “I would have felt like a bigger idiot if I hadn’t done it.”

Indigo is becoming a pogo expert. She got a very nice pogo stick for Christmas – my in-laws actually bought one an adult could use.  She was doing pretty well on it, but this weekend, something clicked.  Instead of hearing the pogo sound a few times and then it stopping, we started hearing 5 minutes of pogo sounds.  She was pogo-ing in the rain yesterday.  It was pretty funny as neighbors would stop by and applaud her.  “Moe, can I go outside and pogo?” was what I kept hearing the past two days.  Go outside instead of watching cartoons? Hmm….YES!

Yesterday afternoon, the kids were fighting.  We sent them to clean their rooms as punishment.  It was raining outside. I was tired.  We were both tired.  Our attempt to sneak away for sex was a failure for two reasons: DJ singing some weird, made-up song that was fucking hilarious and the fact that G’s cat decided my pillow was his bathroom.  Fucker.  We gave up, each got a beer, and curled up on the couch to watch a movie.  We found Serenity on cable.  I knitted, he wrote letters for an upcoming event he is attending, and we enjoyed the time to ourselves.

So the guardian I was having issues with regarding the girl scout cookie sales proved her crazy over the weekend.  She requested last week that I get her child more cookie – and told me how many and in what quantity.  I emailed the troop yesterday to remind them of when the money was due, said I had outstanding cookies, etc.  She emailed me back asking “can you return cookies?”  HUH?  I got the child like 24 more boxes per her request, and now she’s asking if they can be returned? No, they can’t be returned.  I do have another girl who could probably sell them. She is the master of the cookie sales as I’m finding. I reply that the cookies I have were gotten for her child per her request and they could not be returned. That being said, there is another little girl who could probably sell them.  Her reply? “We’ll take them. We have orders for them anyway.”  Then why did she ask???  I can’t help but worry about the money collection for this kid.  Thankfully this is why I’m a stickler for the process.  She signed a contract saying she understood the money thing – and I have all of the receipts.  This will become legal issue if I have problems.  Good times. 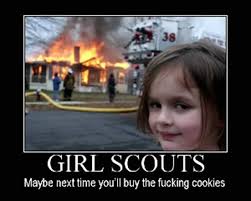 I am actually looking forward to March starting tomorrow.  I know, weird thing to look forward to.  March is the family birthday month – there are 5 birthdays in the month including G’s and DJ’s.  DJ’s black belt test is in two weeks.  Damn – two weeks.  I’m so excited for her.  Three years of working her ass off to get to this point. She’s going to rock it.  Then there is definitely a weekend of fun in there that is to be looked forward to as well.    And March is the month I have to start dedicating myself to running again.

So here’s to the last day of February!